In an age where constant content is king, high quality ski photography can seem a little marginalized. Often relegated to the sidelines of a film production, sniping at the action while the main focus is on the film camera angles. With so many moving parts, the photographer’s angle is frequently less than ideal, but they’re often in a secondary role, so they’re expected to adapt and do what’s best for the whole team.

Personally, I think that there is still a lot to be said for setting aside a whole day in pursuit of just one perfect frame. A series of smaller moments, that through their very distilled essence, hold the viewer’s attention longer, as they linger over the details. Which is what Tero Repo likes to create, and luckily for me, we have been shooting photos in Verbier for 10 years, ever since my first season there. 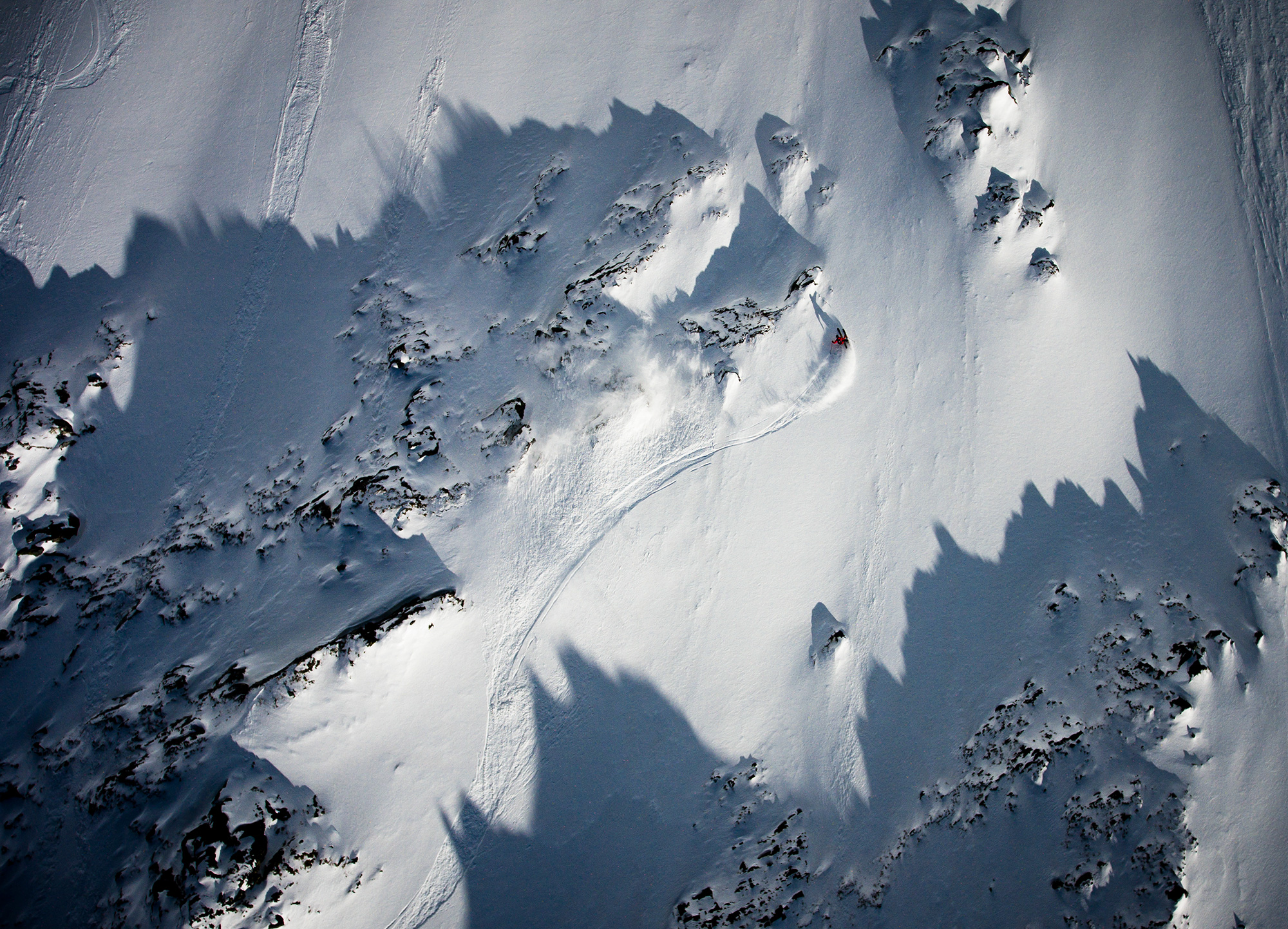 The dense silence of a storm day in the empty trees of Bruson suits us just fine. With no rush, we pole out into a zone we have worked before, but approaching it differently, visualizing how its forms may appear from above. It’s like trying to imagine your friend’s face from upside down. Quiet and considered, it’s an attribute Repo applies across the board, from his photography to his pub chat. He doesn’t say a lot, but what he does say, he means – a rare thing these days.

Sam Smoothy between the trees of Bruson © Tero Repo

Flakes of snow drift down and are cut to pieces as the drone gently detaches from Repo’s outstretched hand and rises up into the upper canopy of the trees. I’m perched ridge top, watching this alien spaceship creep about, searching for the best angle. Repo with his head down, peering into the controller slowly nods and I drop in, explode the pillow and ride on, oblivious to the chasing drone. Repo returns the drone to the case, checks the images, mutters a little and we push further into the woods and back to silence. Tero always has a specific image in mind and his eyes slowly scan the terrain options, searching for that hidden gem that lines up with the images in his head.

Repo doesn’t say a lot, but when he says :

I have always believed him and agreed.

Something up to his high standards has been created and will almost surely be published. A quiet morning of just us, some fresh snow and his talented eye, can lead to one of the most productive sessions of the season. And like his photography, days like this are something to treasure. I ask Tero why he likes taking photos with a drone and the answer is suitably succinct.

“I think of the drone as a tool for getting angles that you don’t reach normally. That way, you can make a normal spot look special.”

The snow continues to fall, with nothing to disturb it now, and I think that our spot already looks pretty impressive to me. Tero pulls up the images on his phone and I begin to understand the magic of his understated art. The conifers tower toward the lens, the poignant calm of storm day skiing perfectly encapsulated in one image.

Leaving the mountain for the day, the clouds start to break up. Perhaps tomorrow we can take the drone higher into the mountains. Repo wants to try something different, to chase the interplay of light and shadow lines. I am just the action in a precise layout of forms and angles, but I’m happy to oblige. When we are just working on creating one image, it feels less like just skiing and more like art. 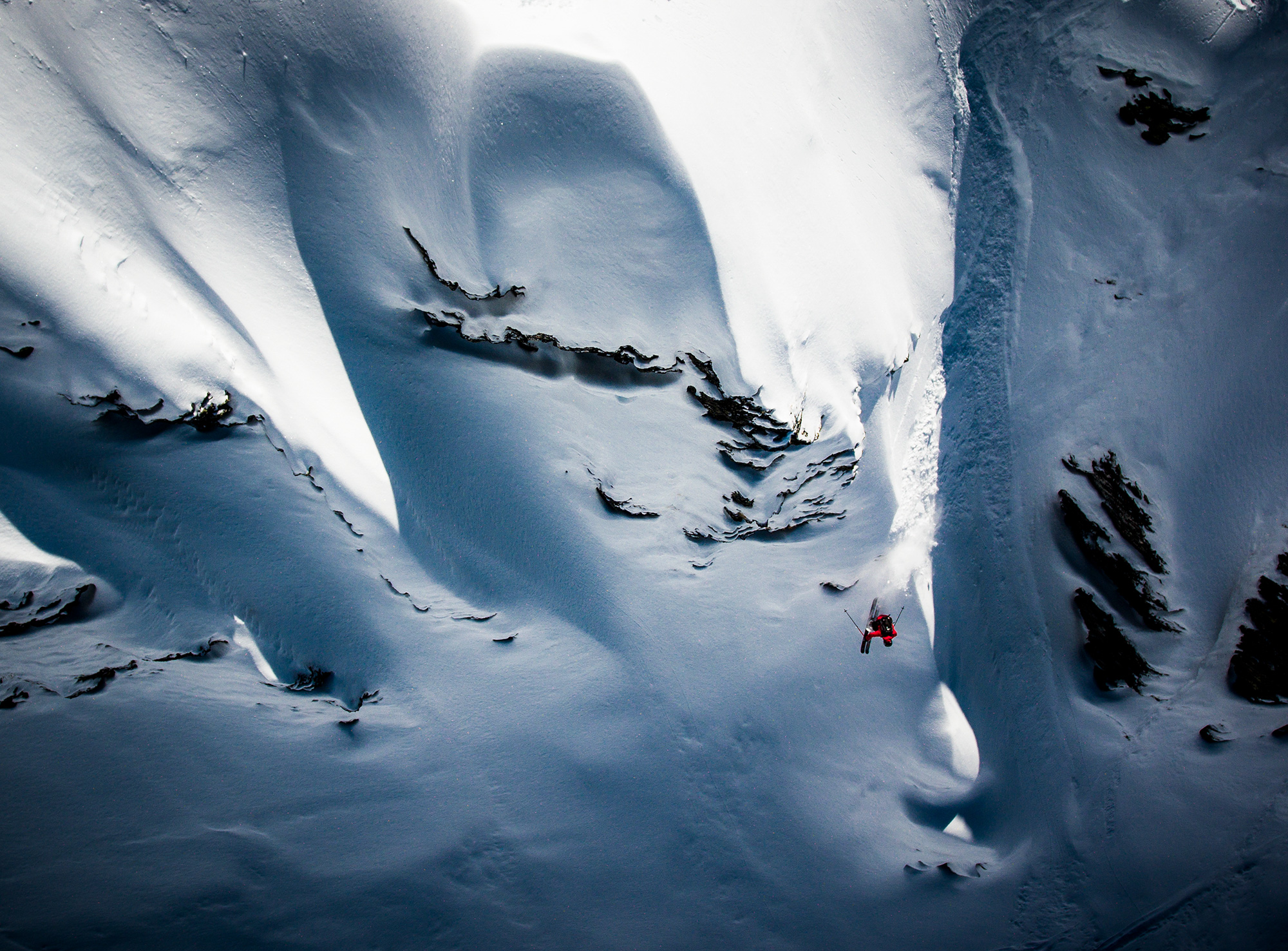